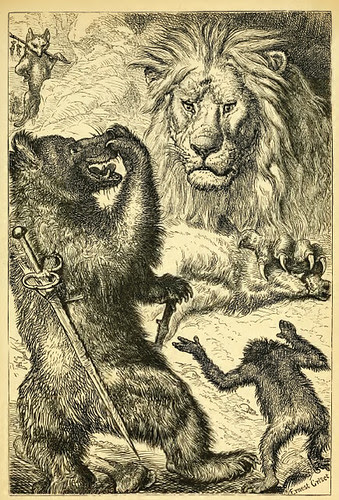 Click here for a SLIDESHOW of all the Griset images. Notice how the bear is holding his nose, just like it says in the story!

M0020 (not in Perry). Source: La Fontaine 7.7 (translated into Latin prose by Fenelon; shortened). This fable is not in Perry’s catalog, although it is very similar to the story of the lion’s bad breath, #21. Pluto was the god of the Roman underworld; see #900. Caligula was a Roman emperor (12 CE - 41 CE) notorious for his outrageous cruelty and capriciousness.
20. The Lion-King and his Court. The Lion-King once decided to count each of the species of beasts over whom he ruled; accordingly, he ordered that his clients and subordinates of every species send their ambassadors to him. A letter circulated bearing the king's seal: The king was to receive his clients in the royal hall for a whole month; a great feast was to be offered. By means of this munificence the prince displayed his power to his followers. He calls them into the court. What court? A charnel house whose stink would make you sick to your stomach! The bear held his nose. This caused offense and displeased the king, who had the fastidious bear thrust down into the realms of Pluto. The monkey applauded this severity, slavishly singing the praises of the king's wrath, his claws, and his stinking cave. But the king indeed punished the monkey also because he was irritated by such bungling flattery. The king was like a Caligula of the lion race! He said to the nearby fox, "What do you smell? Tell me; don't prevaricate." She replied, "You'll have to excuse me; the fact is that I've got a cold and have lost my sense of smell." Thus the fox wiggled her way out of danger.