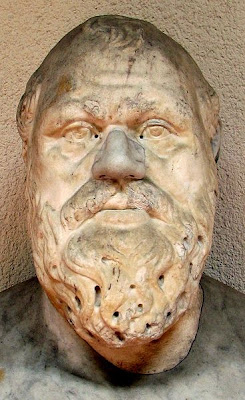 A bust of Socrates (2nd-century copy of a Greek original; source).

M0882 Perry500. Source: Phaedrus 3.9 (adapted into prose). This is Perry 500. Socrates was a philosopher of fourth-century Athens, executed by the state in 399 BCE. In Plato's Phaedo, we are told that before his execution Socrates, who had never composed poetry before, had decided to turn some fables of Aesop into verse. Read a Fabula Facilis version of this fable.
Posted by Laura Gibbs