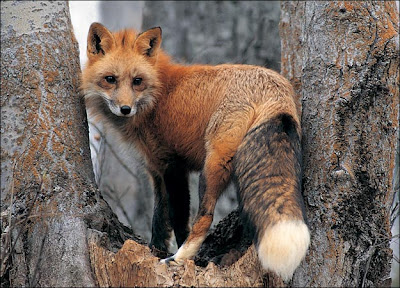 M0022 (not in Perry). Source: Faernus 97 (adapted into prose). This fable is not in Perry’s catalog, although it shares a core motif with the traditional story of the fox’s tail and the tail-less monkey, see #114. Compare also the fable about the tyranny of the eagle, #547.

22. Lion, Fox, and Monkey. The Lion, having gained power over the animals, had ordered that those animals who lacked the dignity of a tail would go into exile beyond the boundaries of his kingdom. The fox, terrified, gathered up her possessions, preparing to go into exile. The monkey, already leaving the country in obedience to the royal decree, said that the edict did not apply to her, since she had such a great tail, and then some, but the fox replied, "You speak truly, and your advice is good. But how do I know whether or not the lion would decide to number me first of all among those who lack a tail?" He whose life must be lived under a tyrant, even if innocent, often suffers punishment as if guilty.