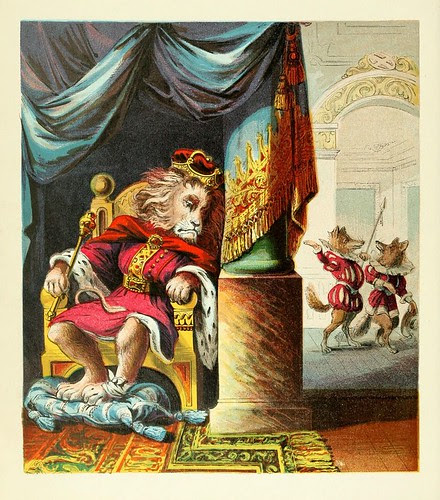 Click here for a SLIDESHOW of all the McLoughlin images.

M0023 = Perry258. Source: Eton Aesop 70. This is Perry 258. Compare the story of the donkey and the goat, where the goat is unexpectedly made into medicine, #320.
The Old Lion, The Fox, and The Wolf. The lion, having grown old, became sick and was lying in his cave. The other animals came to visit the king, but not the fox. The wolf, therefore, seizing the opportunity, in the lion's presence accused the fox for treating her master, the lord of all the animals, as if he were of no importance and thus not having come to visit him. In the meantime the fox also showed up and heard the wolf's closing words. The lion accordingly grew angry at the fox but the fox, begging time to speak in her defense, said, "Who among those who have gathered here have been as useful as I have been? I have traveled everywhere and sought a cure for you from a doctor, which I have learned." And when the lion immediately ordered the fox to tell him the cure, the fox said, "A wolf needs to be flayed alive, and you should put on his skin while it's still warm." Without delay, the wolf was killed and as the corpse was lying there, the fox laughed and said, "And thus it is better not to prompt your master's ill will but rather this good will."