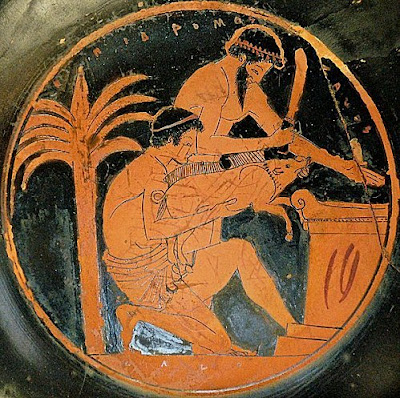 (image)
M0856 = Perry005. Source: De Furia 328. This is Perry 5. Only female piglets were sacrificed at the Eleusinian Mysteries in honor of Demeter, while male piglets were sacrificed at the Pananthenaea festival honoring Athena. The god Dionysus did not accept pigs in sacrifice, but preferred goats.
856. The Seller and his Creditor. In Athens, a certain man was in debt, and his creditor was demanding the money. First he asked the creditor for an extension, swearing that he didn't have the money to pay. Then when he failed to persuade him, he brought the only sow which he owned and put it up for sale, with the creditor standing by. When someone approached and asked whether the sow was fertile, the debtor answered that not only did she produce litters, but that, amazingly, she gave birth to female piglets at the time of the Eleusinian mysteries, and to male piglets at the time of the Panathenaea festival. When the would-be buyer was amazed at his words, the creditor added, "Wonders never cease: this sow will even give birth to little kids for the festival of Dionysus!" The fable shows that most people do not hesitate to swear falsely about impossibilities and falsehoods, if they can profit by it.