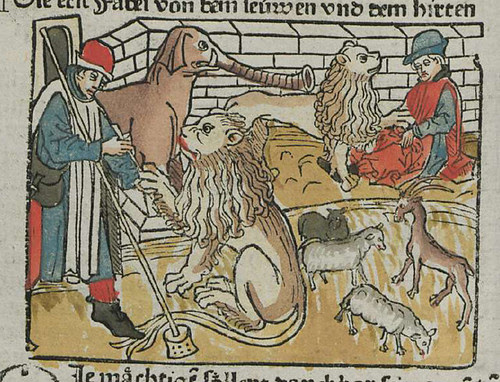 Click here for a SLIDESHOW of all the colored Steinhowel images. Notice how this image shows both stages of the story in a single fragm: in the foreground, you can see the shepherd removing the thorn from the lion's paw and then, in the background, you can see the lion and the man encountered one another in the arena, where there is a wild elephant, too!

M0015 = Perry563. Source: Ademar 35. This is Perry 563. The most famous version of this story is found in Aulus Gellius, Attic Nights 5.14, where the shepherd is named Androcles (Androclus in Latin). For a similar story about a snake and his human friend, see #626. See also the fable of the panther and the villagers, #138.
15. The Lion and the Shepherd. As the lion was wandering about, he stepped on a thorn, so he went to a shepherd, wagging his tail, and said to him, "Don't worry! I am asking you for help; I am not in need of food." The lion raised his paw and put it in the man's lap; the shepherd then pulled the thorn out of the paw. The lion went back again into the woods. Afterwards, however, the shepherd was wrongly accused of a crime and was thrown to the beasts let loose into the stadium at the next public games. As the animals ran here and there, the lion recognized the shepherd as the man who had healed him. He once again lifted up his paw and put it in the shepherd's lap. The king understood what was happening and ordered that the lion be spaerd, and that the gentle shepherd be sent back home to his family. His enemies' torments could not overcome the man who acted kindly.