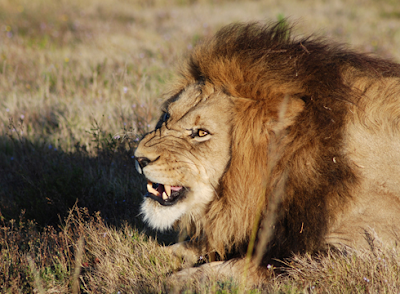 M0014 = Perry144. Source: De Furia 93. This is Perry 144. Compare the fable of the wolf in the sheepfold, #366, or the man who let a fox into the henhouse, #367.
14. The Lion who Entered into the Stable. A lion entered a farmer's stable. When the farmer sought to catch him, he quickly closed the door of the stable. The beast, thus shut in, when he could not in any way get out, first tore the sheep to pieces, and then he directed his efforts to laying low the cattle as well. Then the farmer, fearing for himself, immediately unlocked the gate. Then, whent he lion had gone away, the wife saw her husband weeping and said, "It's turned out as you deserved. For what reason did you want to shut him in, since he is someone you should fear even at a distance?"