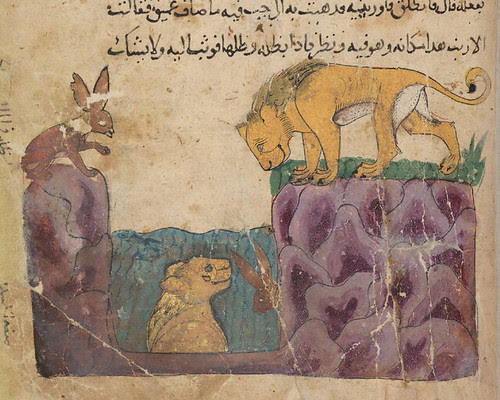 Click here for a SLIDESHOW of all the Kalila-wa-Dimna images from this manuscript. This image does not match the Aesop exactly; here you see a more elaborate story where the rabbit purposefully leads the lion to the well, shows him the reflection, and prompts the lion to anger.

M0002 (not in Perry). Source: Desbillons 8.20 (adapted into prose). This fable is not in Perry’s catalog; in the Panchatantra there is an elaborate story about a rabbit who fools a lion into thinking that the lion’s reflection in a well is a rival lion. Compare the story of the dog and his reflection, #348.

2. The Angry Lion and the Well. Once upon a time a Lion, infuriated and raging with hatred, was chasing another lion who had gotten away in order to kill him and he ran into a well. He looked inside the well, and he saw his own image reflected the water. He believed that this was the enemy he sought; he attacked, and he died. Often those who are enraged do more harm to themselves than to others.