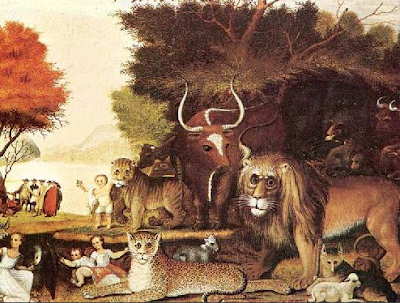 M0017 (not in Perry). Source: Abstemius 117. This fable is not in Perry’s catalog; Perry omitted most of Abstemius’s fables. For another fable about a mismatched feast, see the fable of the bees and the beetles, #694.
17. The Lion Hosting a Feast. The lion presented to the rest of the dumb beasts an abundant, elaborate feast, at which the meat of chickens, thrushes and other such birds, was served, some of it roasted, and some of it stewed. This was quite pleasing to the dog, the cat and to the other carnivorous animals. The other animals, however, those who feed on grasses and grains, cursed a feast of this type as being insipid. The fable shows how difficult it is to satisfy the varied wishes of the crowd.